After an extremely long series of patch/preview versions (10.3a to 10.3v), it is time to release HyperRogue 10.4! While there are no new lands (they are planned for the next version), this release lets you get more out of the existing lands by changing the grid or presentation. There is also a new competitive mode focused on non-standard geometries!

Many games take place on the Euclidean hex grid; curvature in HyperRogue comes from replacing some of these hexes by other polygons. By replacing them with pentagons (or squares or triangles), we get spherical geometry -- a dodecahedron with 12 lpentagonal faces, or a "soccerball" with 12 pentagons and 20 hexagons. Similarly, we get hyperbolic geometry by replacing them with heptagons (or octagons etc.) -- HyperRogue normally uses the "hyperbolic soccerball" tesselation, with two hexagons and one heptagon meeting in each vertex; for a long time we also had a "heptagonal mode", where all faces are heptagonal, which makes the cells bigger and hyperbolic effects stronger (just like the faces of a dodecahedron are larger than the faces of a soccerball). 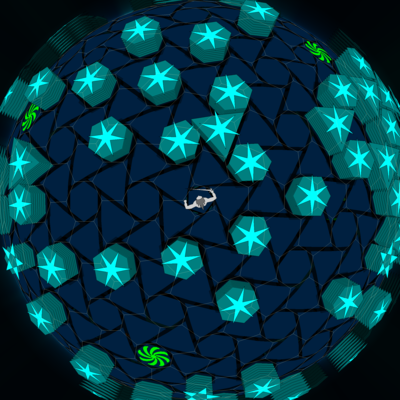 Can we go the other direction? If we do not mind losing a bit of regularity, we can! Goldberg polyhedra are obtained by adding more hexagonal faces to a dodecahedron, in a symmetric way described by two numbers -- e.g., soccerball corresponds to GP(1,1). We can do the same operation in the hyperbolic case, and now HyperRogue lets us play in the resulting worlds! 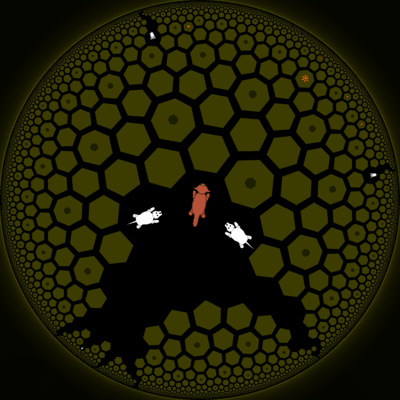 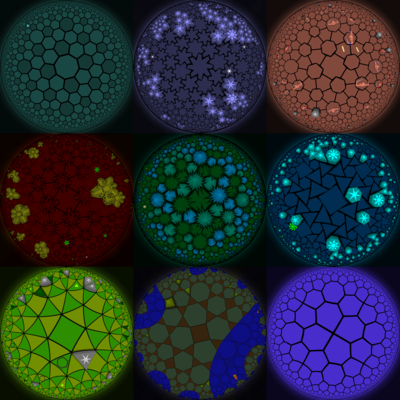 This construction is available in the "experiments with geometry" in special gameplay modes menu. Choose to play the "Crossroads IV" in order to play something similar to the full game -- not all lands though, as the Great Walls are not implemented, and patterns are only approximated. Additionally, the floor pattern code in HyperRogue has been rewritten, making floors look much better not only in GP grids, but in all non-standard geometries available in HyperRogue! The handling of alternate geometry variants of various lands has been improved too, with more efficient menus and improved generation rules in various combinations. 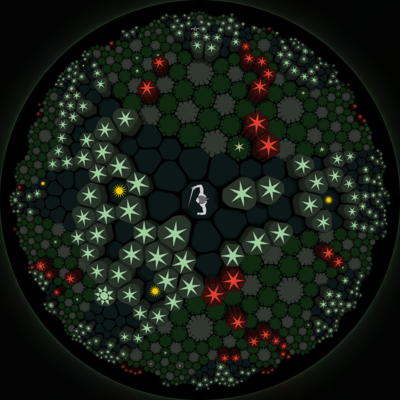 New geometries come with one serious problem, though: there are 15 geometries, most of them in the bitruncated and non-bitruncated variants, some in their Goldberg-Coxeter variants, and more than 50 lands... this makes thousands of combinations. Which one to play? This problem is solved in the new Strange Challenge, which is a combination of Orb Strategy, Pure Tactics, and geometry experiments, inspired by daily/weekly challenges found in other roguelikes and roguelites. Every 77 hours, a new challenge is randomly generated, by choosing a random geometry, and creating a combination of two lands in this geometry; you also get random magical Orbs to be used when you get into a tight spot. This is named "strange challenge" because, well, some of the resulting games are somewhat strange (and also because it lets us adjust the rotation nicely -- daily rotation would be too fast, and weekly rotation would be too slow). Compete with your friends and the best HyperRogue players for top scores in these challenges! (Note: this feature is intended to be available only on Steam.)

The full changelog is here; the most significant other changes include more representations of hyperbolic geometry (both 2D and 3D), attack animations, memory saving for low memory devices (preventing crashes on iOS and Android), relaxed rules of Dragon dismounting, rebalanced Terracotta Army and Snake Nest, and fixed Blizzard graphics in Windows OS. HyperRogue version 10.4 can be played on Steam and itch.io. Mobile versions will be updated later. Have fun!
Posted by Zeno Rogue at 03:46