HyperRogue 9.0 is released on Steam and itch.io!

And, since this is a major version, HyperRogue 8.3j can now be downloaded freely from the website! In comparison with the last free version (7.4), HyperRogue 8.3 includes new special modes (heptagonal mode and Chaos mode), some new ways of presenting the hyperbolic world of HyperRogue, and more than 10 new lands based on various themes, unique mechanics, and properties of hyperbolic plane.

Android and iOS versions of HyperRogue 9.0 should be available soon -- and with some new features too (shmup mode, leaderboards and achievements via Google Games in the iOS version, local scores in the Android version). Stay tuned! 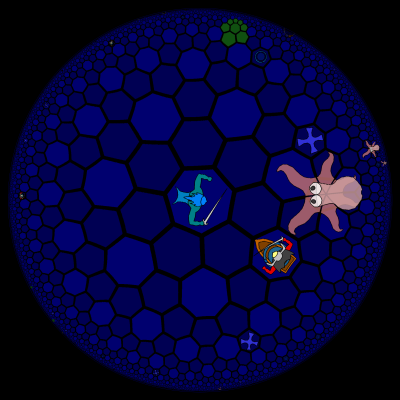 A long time ago, the Kraken Depths were a trade route. But then, Krakens have risen out of the depths. Many trading ships sank here, together with the treasure their carried. Legend says that you can uncover the secret of a magical weapon spell somewhere in the depths... Kraken Depths are remotely based on the idea of phenomist in the ideas thread. 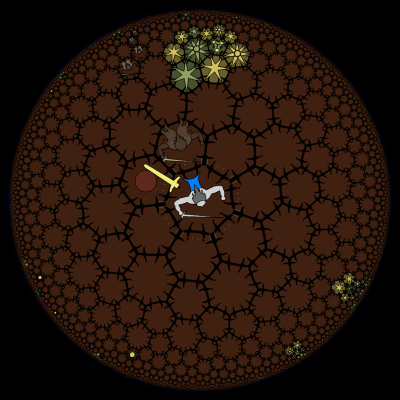 Completing the Kraken Depths yields Orb of the Sword -- which creates a magical energy sword on a cell adjacent to you. This energy sword moves with you, but you cannot rotate it -- it simply remains at the same angle, slashing all the monsters it passes through. In the Burial Grounds, mastering Orb of the Sword is crucial for excavating the treasures and defeating monsters there. Although the strangeness of angles is probably the most well known property of the world of HyperRogue -- for example, the sum of angles of a triangle is less than 180 degrees -- the Burial Grounds are probably the first Land where understanding this well is important. 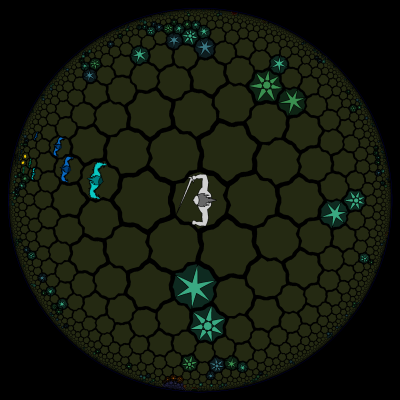 Trollheim is unlocked by killing a member of each of 6 subspecies of Troll available in the game. In this kingdom of Trolls, you fight large groups of them, and then find your way back to their treasure caches -- bodies of slain Trolls will be helpful, but you can easily get confused! 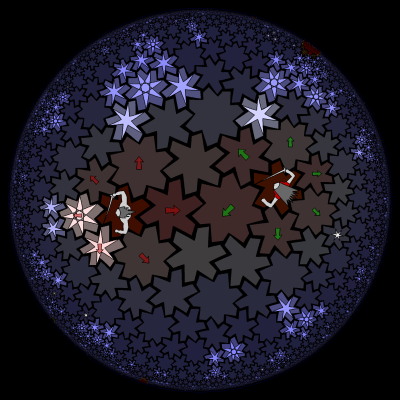 HyperRogue 9.0 also introduces turn-based multiplayer. Players take their turns simultaneously -- first all players make their choices (by using separate sets of configurable keys), then the move is performed unless it leads to death of any of characters. Sooner or later, probably a bad situation will happen -- one of the character would die no matter what they do, the characters separate and are unable to rejoin, or one of the players simply wants to leave for some time. In this case, a character can leave the game world, until one of the suitable Orbs is used to restore them. This plays slower than the normal single-player turn-based HyperRogue, and for this reason we think that the shoot'em up mode works better in multiplayer -- but turn-based multiplayer is still fun :) Additionally, the game now supports up to 7 players (not sure whether it is still fun, but why not support this?), and specific stats (kills/treasure/deaths) are counted for each player.

There were also many improvements to the user interface -- many of these were inspired by Alan Malloy's videos: Fixed bugs in gameplay: Other fixes and minor features: As usual, there will be probably patches -- changelogs are first reported on the Steam forums. Have fun!
Posted by Zeno Rogue at 16:32 1 comment: