a paper model of the world of HyperRogue 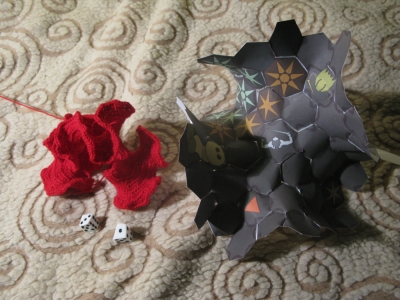 After looking at some hyperbolic footballs, we have decided to make a paper model of a part of the world of HyperRogue! Such a model should give us some insight about how to imagine this world. 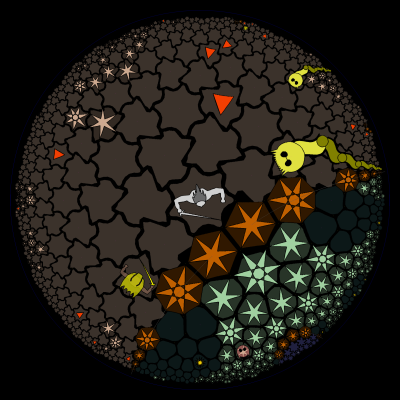 This is the HyperRogue scene that the model is based on. The model represents all the cells within radius 3 from the player character, which is 50 cells (35 hexagons and 15 heptagons). It appears curved because of the negative curvature of the hyperbolic plane -- the perimeter of a circle grows exponentially with its radius, not linearly as is common in the Euclidean world, so the edge has to twist a lot to fit everything, and the larger the model, the more curved it becomes. I was afraid that a larger region could be harder to fit in Euclidean space, or require too much work to complete, but probably one or two layers more would still be fine. 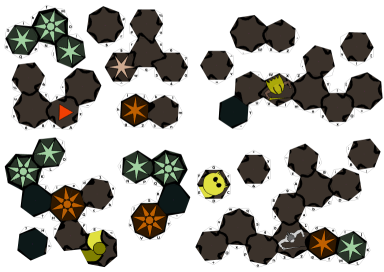 Based on the scene, HyperRogue rendered the net above. Print the net on four pages, cut out all the shapes, and glue the white triangles together — letters say which white triangle should be glued to which one -- actually, we have been using a small stapler for this, not glue. If I recall correctly, 85 pairs of white triangles had to be stapled.

This is how the model looks in motion.

If you would like to create your own model of your favorite land in HyperRogue, the next version of HyperRogue is going to create a net for you, based on the current scene around the player character! At the moment, HyperRogue is only programmed to create a net for 50 cells around the player on a heptagon -- of course, as we already know, the 50 cell pattern tiles the hyperbolic plane, so maybe one could create larger models simply by gluing the fifty-cell models together?

Hereby,version 8.2 of NotEye, and version 16.2 of Hydra Slayer, is released!

NotEye was silent during the last year, but in fact, while I have spent most of my time on HyperRogue, I have been also working on NotEye as a part of ADOM -- so ADOM always had the most recent version, but the official NotEye was not updated. Now it is high time for release, and hopefully, the long-awaited release of ADOM on Steam will come soon too!

The update to Hydra Slayer is mostly caused by the update to NotEye -- other than that, just one bug with mouse is fixed. Anyway, if you like Hydra Slayer, or want it to be updated, please vote for it on Steam Greenlight! After HyperRogue was accepted for Steam, both its free and paid versions were hugely improved, and hopefully a similar thing will happen for Hydra Slayer. So whether you are willing to buy the Steam version of Hydra Slayer or you are just a fun, Hydra Slayer's presence on Steam will be great for you! :)

Also, the websites for NotEye and Hydra Slayer have been improved.

Download the new version of NotEye from its download page -- you can download either NotEye+Hydra Slayer, or a Windows bundle with several games preconfigured to work with NotEye -- or just download ADOM, that's definitely recommended too. Have fun! :)

The changelog follows. For developers:
Posted by Zeno Rogue at 08:14 No comments:

HyperRogue 7.4 is released on Steam! The time from the last release of HyperRogue was relatively long, but the new version has many notable new features, so the wait should be worth it! 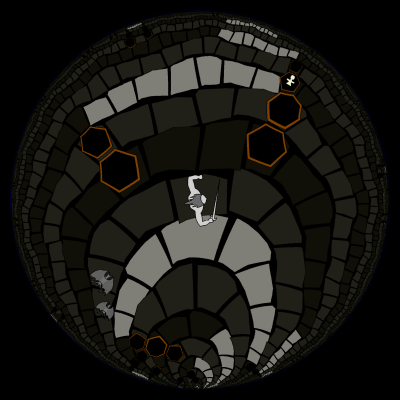 Some people on the forum wondered about how does the third dimension work in HyperRogue. Shouldn't the curvature of the world make climbing the mesas in Red Rock Valley somewhat strange? Would it make sense to have even higher hills? Well, Ivory Tower is a land with gravity. You can now play a hyperbolic (turn-based) roguelike platformer! The Ivory Tower is unlocked when you collect 60 $$$. 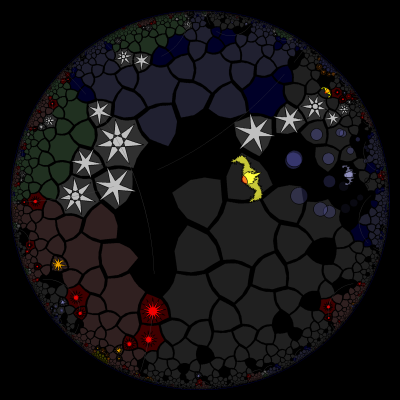 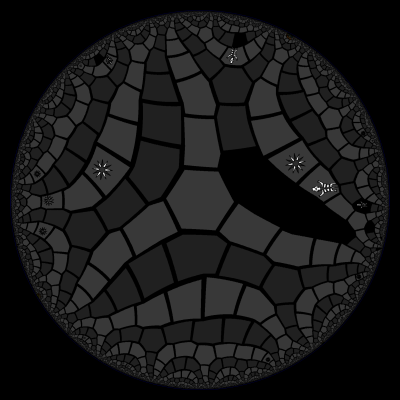 The Zebra is a very simple land, which refers to the simplicity of the Land of Eternal Motion. However, there is one change from LoEM: only some cells fall when stepped on. This land is unlocked when you collect 30$$$, which includes 10 Phoenix Feathers. This pattern has been posted by zelda0x181e on the Steam forums -- thanks! 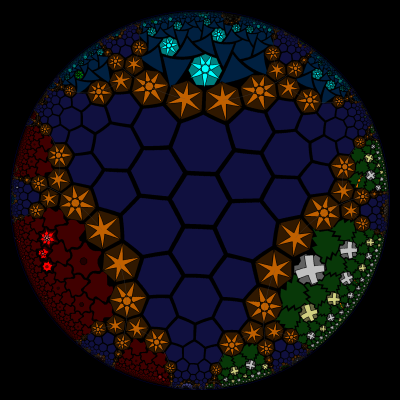 The Crossroads III is a new layout of the Crossroads, which features Great Walls crossing at right angles, just like in the Elemental Planes. 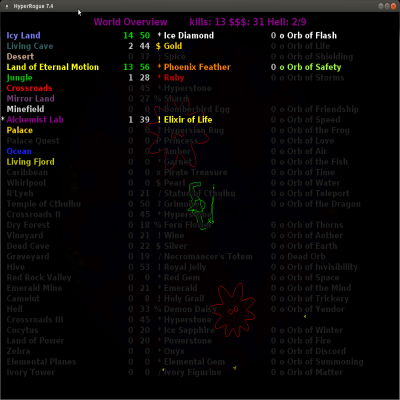 In this version, the World Overview is introduced. Press 'o' to display all the lands in the game, together with their treasure, Orb, and your current and high score. You can click on the land to get more information about it, which includes its unlocking rules. When activated in the cheat mode, you can use this to move between lands, or get items and orbs, very quickly. Since the World Overview is a nice place to present information about the game, it will potentially allow to add more complicated mechanics for land unlocking. At the moment, R'Lyeh has been changed so that it is only reachable via the Ocean (at first -- you can get to/from R'Lyeh by land after collecting 10 Statues of Cthulhu), and a new mechanics is added, which gives a benefit when you collect 25 treasures of some type -- the native Orb of that land will appear everywhere, unless it is dangerous, useless, or otherwise forbidden in some place. 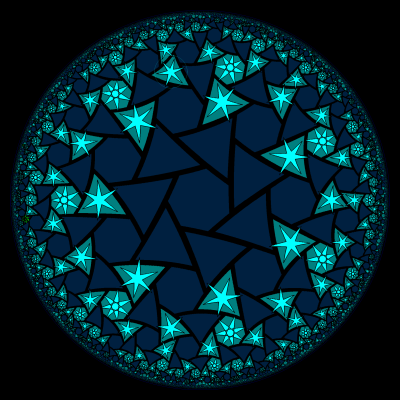 In Random Pattern Mode, you can play variants of some of the usual lands, but with their patterns replaced with random ones. So you can get an Alchemist Lab with a regular pattern, a Vineyard with a random pattern, and so on. Have fun! 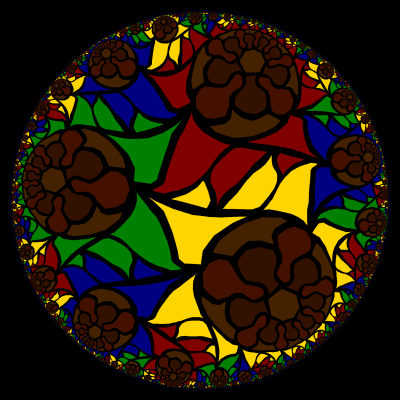 There are also some interesting changes for the more creative players! Map editor, vector graphics editor, pattern modes, and gameboard modes known from the previous versions have been merged into one. That is, while in the map editor, you can press 'r' to choose one of the patterns -- when you edit some cell, all the other cells which are equivalent according to this pattern will be changed too! You can pick one of the three implemented patterns (Emerald, Palace, Zebra), and choose which symmetries are taken into account for equivalence. You can also press 'p' to paint the cells with any color; there are also some predesigned patterns available, including the old pattern and Gameboard modes, and options to draw only hexagons or only heptagons. You can press Space to switch between the map editor and vector graphics editor, which now allows not only to edit the player character and floors, but also items and monsters; moreover, if you are editing floors and a pattern is selected, this will affect floors according to this pattern -- which allows to draw more complex tesselations, like the Sunflower picture or Zebra patter above. You can also save and load your pictures now (pictures are also automatically saved when a map is saved), and last but not least, you can now select a file when saving and loading. Also, there have been some balance changes. In the patches to 7.3, Eagles and Ghosts have been weakened. In 7.4, it is no longer possible to use Orb of Space to bring Orbs from the Land of Power (most of the power is lost, as if you tried to bring them out normally), and the Orb of Time + Orb of Shielding combination has been weakened somewhat. Ghosts can now go through Tentacles. Please inform me if you have abused these, and want to reset your score in the Leaderboards.

Some things were refactored (mostly regarding monster movement, setting things of fire, and temporarily activable objects), which should hopefully make some things work in a more uniform way, make easier to introduce new features in the future, and hopefully did not break anything.

It is now easier to navigate around obstacles in the shmup mode. Also, you can now select push direction when pushing thumpers in the shmup mode. Hardcore mode: monsters can now kill you in the LoEM, and being stuck on dangerous terrain (fire, chasm, etc..) in hardcore mode kills you now. Ivy no longer drowns. You no longer can control where the key spawns by moving Orb of Space. An unarmed Princess no longer can kill a skeleton. If you have a highscore of at least 25 Bomberbird Eggs, the Minefield reveals nearby cells right from the start. Thumper interacts better with palace features now. Cutting trees works better with Mimics now (mimics cut trees when you move, and attack when you cut trees) When Orb of Space is used in the Alchemist lab, it sets the color of the target cell (just like normally) Some typos and missing messages. Translations are not done yet.