HyperRogue version 10.3 is released on Steam and itch.io! This big update continues the geometry experiment theme of HyperRogue 10.2, and also includes four new lands (two of which are included in the main game and two of which are for special geometries only). 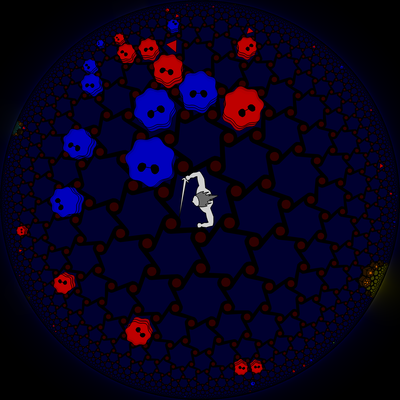 Some of the Slime Beasts have decided to revolt against the color rules in the Alchemist Lab. They have changed their shape and consistency, declared independence, and established their own Jelly Kingdom. This land is based on simple, but unique mechanics -- Jellies switch between being a wall and being a monster after every treasure you pick. 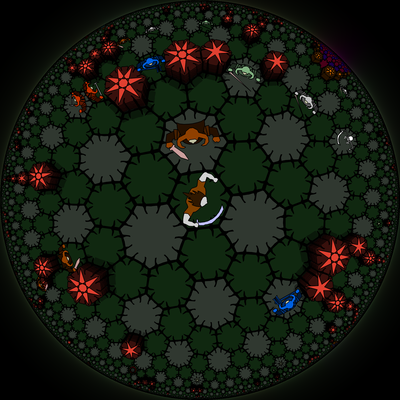 Once a beautiful city... but now overrun by the mighty Raiders of unknown origin.

Raiders (and Skeletons, who also dwell in the Ruined City) cannot be harmed with mundane weapons, but each of the five colors has its own movement restrictions. Choose a path that gives you an advantage to run away from them! (Hyperbolic geometry will help, of course!) 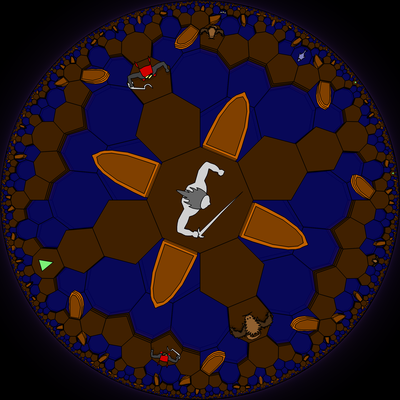 The Docks have no new mechanics, but they feature an interesting tree-like structure that works in the octagonal geometry, but has no natural counterpart in other geometries. For this reason it does not appear in a standard game of HyperRogue. The picture should explain everything :) 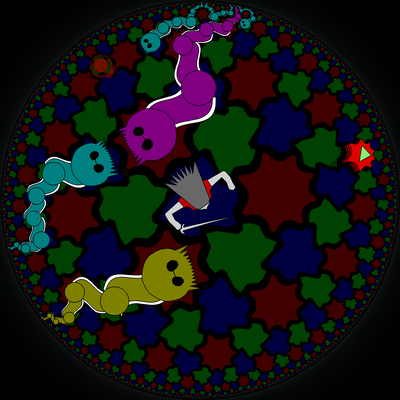 The Snake Nest is another land not in the standard game. It is a version of Red Rock Valley, but where every cell is colored in one of the three colors. The snakes also come in three types -- each of which is restricted to two colors. It is exclusive to geometries where cells can be nicely colored this way. (Visit the Red Rock Valley in the current session, or obtain a highscore of 25+ Red Gems, to unlock this in the land list for the Octagons geometry.) 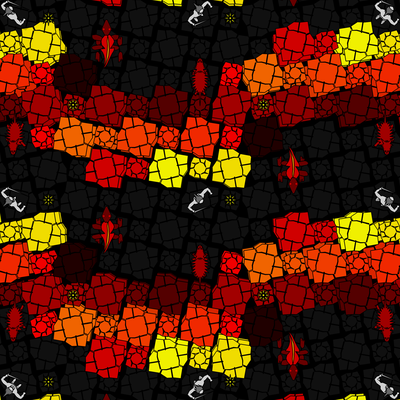 HyperRogue did not previously include the most common and boring tiling in games -- the square grid. The square grid is included now, and it comes in some more interesting variations, too! After bitruncating, we get a tiling made of octagons and squares, which is definitely less standard: from a large cell in the picture you can move to eight adjacent cells, while you can move only to four adjacent cells from a small cell. You can also play on a Klein bottle now -- that's why you see a mirror image of yourself on the left! 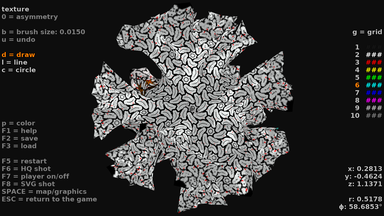 More of artistic than of "gaming" nature, the new texture mode lets you easily draw nice tesselations of the hyperbolic plane (or any other geometry supported by HyperRogue), in a way similar to Paint-like programs. Draw some lines, and it often ends up looking great! This is much easier to use, and in some ways more powerful, than the old vector graphics editor. The screenshot above shows drawing directly on the Hypersian Rug. The obtained picture can then be explored, played on, or saved. 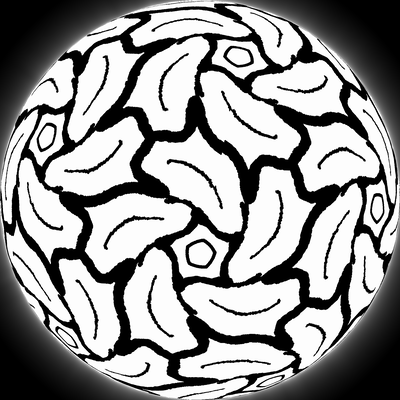 After drawing a tesselation, it is also possible to convert it to another geometry. For example, the picture above is the spherical version of the tesselation from the last picture. Thus, it is possible, for example, to load Circle Limit IV by M. C. Escher, change its base tiling to another hyperbolic tiling, and walk on it, or view the result in the Hypersian Rug mode. This is inspired by the hyperbolic versions of M. C. Escher's tesselations created by Jos Leys.

Speaking of the Hypersian Rug -- this mode has also been extended. Previously, you could view a fragment of a hyperbolic plane embedded into the Euclidean space; now, it works with any geometry on both sides. You can now also explore the model in first person perspective. The animated picture above shows an Euclidean square embedded into a 3-sphere -- although the square is actually flat, it appears to be curved negatively, because the space itself is curved positively! Flying inside a 3-sphere is an interesting experience, as things close to the antipodal point, or things just behind you, will appear as if they were very close to you. See this video for more details.

Thanks to Fulgur14, Patashu, tehora, and tricosahedron for their ideas for new lands, themes, and features. Android and iOS versions should be updated soon. This version also includes many minor bugfixes and interface improvements; the full changelog is on Steam forums or the website.

Follow the newly created HyperRogue page on Facebook and @ZenoRogue on Twitter. Get HyperRogue 10.3 on Steam and itch.io, and have fun!
Posted by Zeno Rogue at 10:51