HyperRogue 7.1 is released on Steam! 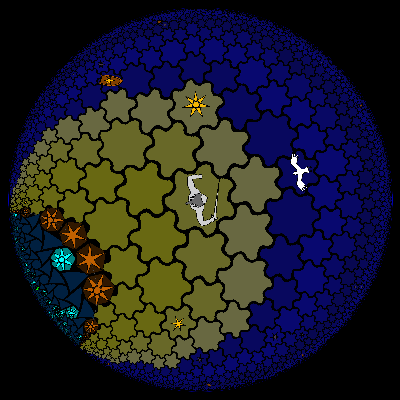 In this version, after collecting 30 $$$ you can go to the beach and, if you can survive the attacks from Albatrosses and escape from the tides, collect some Ambers. The Ocean is the first land in HyperRogue which features equidistant curves prominently. 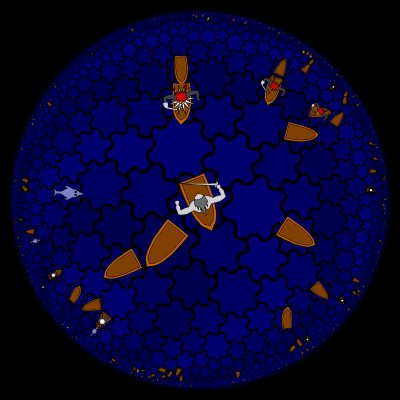 You can also take one of the boats, and go into the Ocean. From there, you can reach other coasts, access Caribbean, the land of Pirates (Caribbean was already there in 7.0, but now, it is only accessible via the Ocean), or the infinite Whirlpool, where your boat is only allowed to go with the current, and you have to defend from Sharks and Pirates, and capture treasures from other boats caught into the whirlpool. 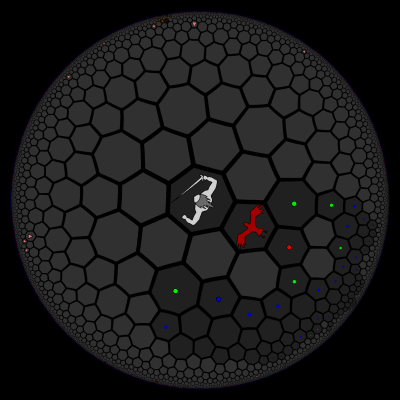 Another place where you can go after collecting 30 $$$ is the Minefield, based on a well known game. Stepping on a mine is usually game over, but you know the number of mines next to you, so hopefully you will know where not to step!

The ideas for these lands were not mine -- Ocean and Whirlpool are wonderfullizardofoz's ideas, and the Minefield is Piotr Migdał's idea. Please send me ideas for new lands, and they might be added to HyperRogue at some point! (Although I already have some ideas...)

Version 7.1 also has some other features. Press 'v' or click the 'menu' button to see the new main menu, which conveniently lists all the features of HyperRogue. Also, a FAQ (Frequently Asked Questions) written by Fulgur14 is now available on the website. These two features should make it easier to fully enjoy HyperRogue. Also, the shmup mode correctly says that the number of knifes is counted (not the number of turns), fires are burning off and heat dissipates even offscreen (previously, many of the speed runs abused the fact that heat did not dissipate offscreen), Fire Cultists can attack more terrain types, another message is used for Sandworm explosions when you see no spice created, and a bug which caused the Icy Land to become too hot in the shmup mode has been fixed.
Also, the German translation should be available soon. Have fun!

By the way, I have recently recorded a new trailer for Hydra Slayer. Please vote for Hydra Slayer on Greenlight, if you have not done this yet! Versions 7.1a/b fixed: - "(v) menu" instead of "(v) config" - blow into water/fire/mines - the PC could just stand in place during high tide and not drown - fixed the "escaped Whirlpool" achievement - fixed the Restart key - in the very unlikely scenario when the Key is generated in the Whirlpool, it is protected by a Pirate party with Orbs of Water, so it hopefully does not run away and you can escape the Whirlpool Version 7.1c fixes: - you can no longer use Orb of Air against sharks, seeps, and other restricted monsters. - but you can use Orb of Air to blow monsters into chasms. - made the Ocean less bright in the plain mode (still brighter than LoEM), and the Minefield slightly brighter (to make it more different from the Land of Mirrors). Also, made the fire graphically calmer in the Land of Power. - Orb of Aether now protects you from mine explosions, but also makes you unable to detect mines. - for thematic reasons, R'Lyeh is now more likely to be adjacent to Ocean (and less likely elsewhere). - Fixed the Hyperstone Quest message to include new lands. - Two new achievements added ("Black Mark" and "Nasty Pet") - Fixed a bug with Space/Safety (the game was trying to calculate the cost after Safety acted -- this is fixed, hopefully this fixes the crash too) - Fixed a bug with Crossroads II/Ocean border - mine marks now appear above the PC/monsters. Version 7.1d fixes: - bug with Crossroads II generation which also caused the game to stop generating lands fixes. - saving the new treasures/kills. - Euclidean mode supports the new land, as well as the gameboard modes (pick the gameboard mode you want, and then pick Euclidean mode, to activate an Euclidean gameboard). Version 7.1e fixes: - collecting OoY works. Version 7.1f fixes: - Tame Bomberbirds now fly over chasms. - Forgetting old kills during saving, this is fixed.
Posted by Zeno Rogue at 12:46 3 comments: