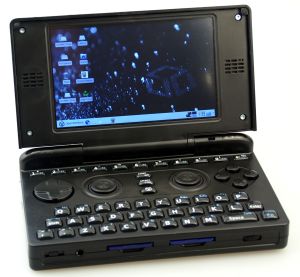 
mcobit has contacted be about his porting of HyperRogue to the gaming console Pandora. It was quite fun to improve HyperRogue's controls to make them work well on a device with a small screen, keyboard, and two joysticks (even if I have no Pandora myself). On Pandora, you need to touch and release to move (or use a joystick), arrow keys move (instead of panning), and shoulder buttons can be used to move diagonally; these could be also useful with other ports in the future. But the desktop HyperRogue got some control improvements, too. There are no real gameplay changes, unless you count new flavor messages which appear when you press 'g'. Download HyperRogue 4.3 here (Windows+source+music, 44MB); if you already have the music, you can download the version without music (1MB).

By the way, the next version of NotEye will have a Third Person Perspective mode. NotEye's FPP mode was mostly a joke to show the nonsense of the obsession with 3D in modern games, but the new TPP mode is something that looks quite well and is actually playable. Stay tuned!
Posted by Zeno Rogue at 12:36 No comments: Links to this post