HyperRogue has been updated, and five new lands are coming! 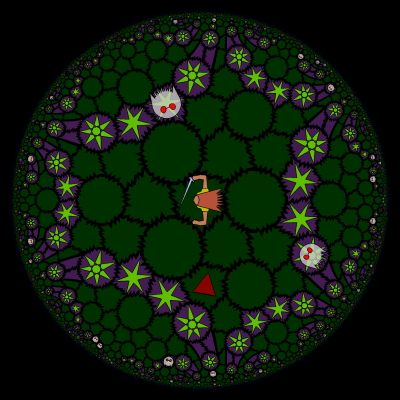 The Vineyard is a land filled with a very dense and regular pattern of ultraparallel lines. Vine Beasts move normally, and Vine Spirits move in the vines. 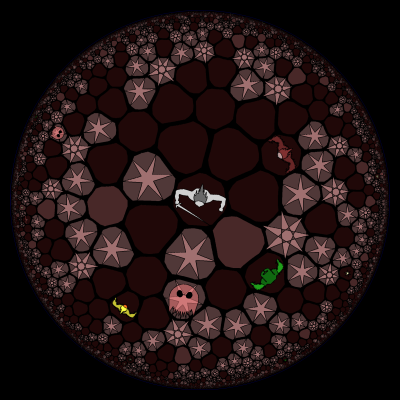 The Dead Cave is a random maze level, Live Cave without a spark of life. There were maze levels previously (Dry Forest, Alchemist Lab), but it was easy to cut down trees, or to change the color of slime. Dead Cave is mostly static, though. There are Orbs of Earth and Earth Elementals, which can change the layout of walls, but they are comparatively rare. 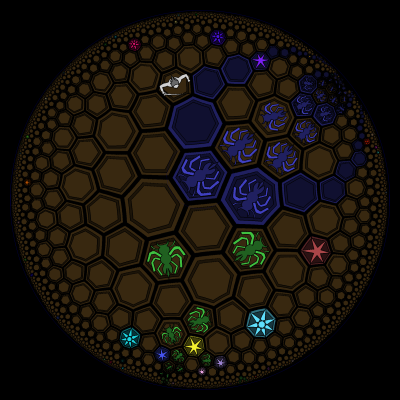 Many people seem to be wondering how a war would look in the world of HyperRogue (see this thread on the Steam community discussion for example), and the Hive is an attempt to answer that. You will encounters huge armies of Hyperbugs there, luckily these armies will be more happy to fight each other than you. 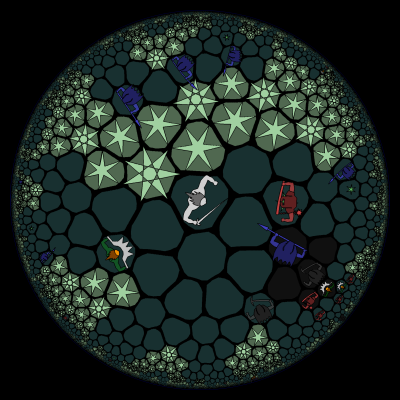 I have been trying too hard to show many monsters on this screenshot;) The Emerald Mine is a living cave with a regular stable pattern, reminding of the art of Escher a bit. It contains Hedgehog Warriors from the Jungle, Miners who break down walls when they die, as well as new monsters which require non-standard methods of attacking. 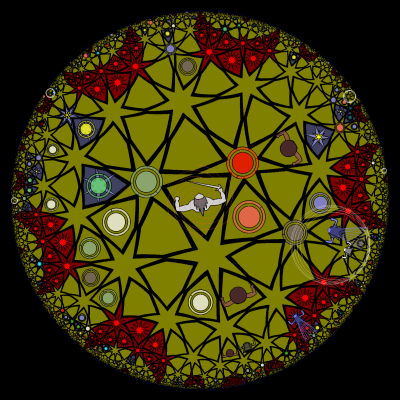 The Land of Power is a land filled with orbs. Monsters are numerous and powerful -- Witches are using Flash, Speed, Winter, as well as the new Fire and Aether Orbs against you. 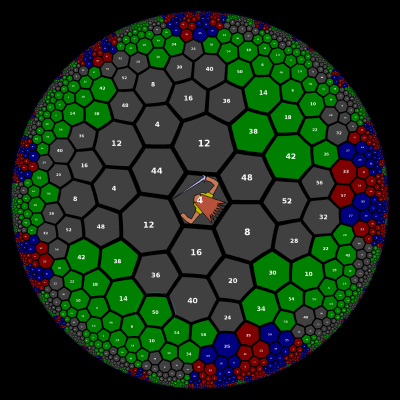 The regular patterns of the Vineyard, Emerald Mines, and Land of Power all come from the same underlying pattern, which has 40 tiles and fills the whole world of HyperRogue. You can have some fun with this pattern in the Periodic Editor.

HyperRogue is updated to 6.0 on Steam. HyperRogue Gold for Android should be updated soon, free versions will follow after some time (1-2 months?). Have fun!

Minor changes:
Posted by Zeno Rogue at 08:14 2 comments: Links to this post

HyperRogue updated for free and Android!

The Android version of HyperRogue, as well as the free version, have been updated (to version 5.5a)!

Have fun! And buy the Steam version too! You not only get access to Steam leaderboards and achievements, but also more interest on Steam generates faster development of new versions. Currently five new lands are planned, including: a land where you can witness battles between large armies, a land filled with a regular and dense pattern of ultraparallel lines, a hyperbolic fjord with a regular but complicated pattern and enemies which require different ways for defeating, a randomly generated cave (similar to the Lab and the Forest, but this one is mostly static), and a land where you can find lots of magical orbs, but guarded by very powerful enemies.

Is the hyperbolic geometry in HyperRogue just an irrelevant gimmick, or does it indeed affect the gameplay? Well, things like that should be checked experimentally! I have implemented the Euclidean mode in HyperRogue, where you play with (almost) exactly the same mechanics, but the grid is the usual, hexagonal one.

So, here are the most significant results:

Crossroads and Great Walls: Infinite straight lines which never cross... Well, this effect cannot be achieved in Euclidean geometry. Unless all great walls are parallel, but this is boring.

General Tactics: In most roguelikes, when two monsters are attacking you, a good strategy is to enter a corridor, so that they have to attack you in a queue. In HyperRogue, this can be done practically everywhere, by using the properties of the hyperbolic geometry. And this does not work on the Euclidean hex board, so if two monsters are attacking you at the same time, you have to run until you either find a third monster (which is usually game over), or you are saved by a terrain obstacle. 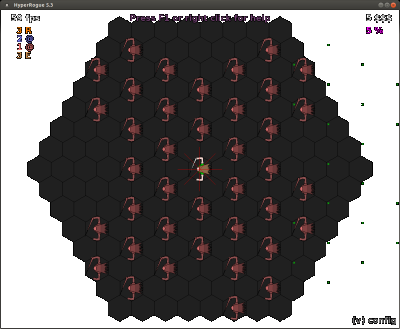 Land of Mirrors: Those annoying Mirages, who were never able to stay close to you in HyperRogue... As expected, Mirages work much better in the Euclidean world. You can easily amass a big army of them. 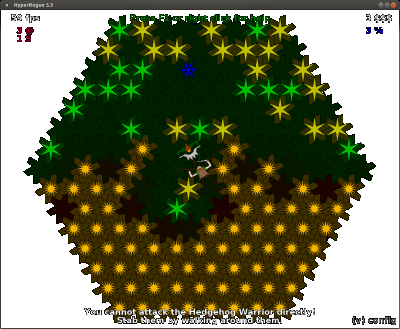 Alchemist's Lab: As anybody who knows the game Hex knows, there is either a blue path from north to south, or a red path from west to east. This means that the Alchemist's Lab is hard to explore, you will find yourself blocked by a path of the wrong color. Luckily, slime explosions will fix this for you. (The fact from Hex works in HyperRogue too, but, in some sense, there are many more directions.)

Living Caves:Land generation is slightly biased towards wall tiles here. In hyperbolic geometry, you could still go wherever you wanted, but in Euclidean, you will soon find out that walls are blocking all your paths.

Dry Forest: As above, walls block your movement more efficiently than on the hyperbolic plane, and thus, it seems harder to escape fires... (This is the new land in the Steam version.)

Land of Eternal Motion: On the hyperbolic plane, if you escaped by running on a straight line, Running Dogs would not catch you, because they would be forced to go on an equidistant curve, and these are longer than straight lines. On the hex board, it is impossible to escape even from a single Running Dog.

Orb of Yendor: The quest for Orb of Yendor is obviously much easier in the Euclidean world :)

The Euclidean mode is available in the Steam version of HyperRogue (5.3), on the third page of the config menu. It is not yet available in the free version, nor for other platforms, but it will be added later. Have fun!
Posted by Zeno Rogue at 12:37 No comments: Links to this post