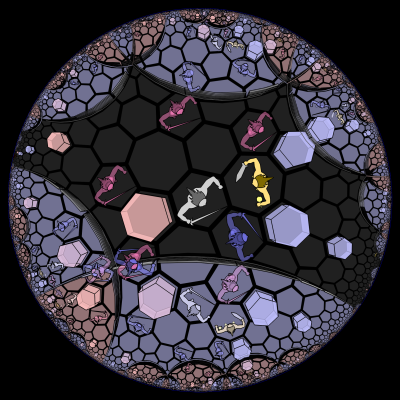 HyperRogue version 10.0c is released! You can download the packages for Windows and OSX, and source that compiles on Linux. You can also buy HyperRogue on Steam for typical Steam features such as automatic updates, online leaderboards and achievements. (The Android gold version should be available too, and the iOS version has been already sent to review.)

The picture above shows the Hall of Mirrors, which replaces the Mirror Land, and features long straight mirrors, revised mimic movement rules, and new monsters. Mirroring is now much more interesting! :) Thanks to tehora and wonderfullizardofoz for ideas for this land. 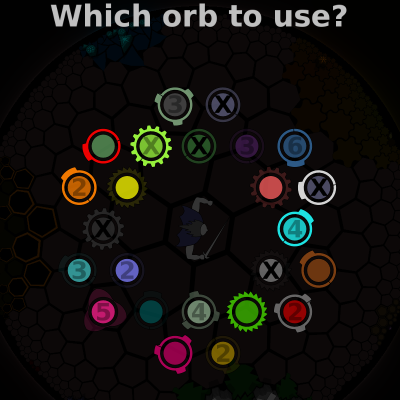 The world of HyperRogue is larger than anything Euclidean, with over 10200 cells in 1000 steps from the starting point. By design, the classic version of HyperRogue has no equipment or consumables -- if it had, the players could grind this practically infinite world, in order to always have their consumable inventory full, and best equipment possible -- quite boring for gameplay. This significantly reduces the resource management aspect compared to many classic roguelikes and other computer RPGs; furthermore, randomly placed temporary orbs introduce their own form of grinding -- when you travel the world looking for a specific set of orbs. There are also players who are unhappy with having to start a new game after a single mistake.

The Orb Strategy mode has been introduced for players who are not happy with these aspects of HyperRogue. It solves the problem of grinding by limiting the number of Orb uses by your collected treasures; as usual, the more treasures you collect, the harder the land becomes, so getting too many orbs of a single type should be impossible. The Orbs no longer appear randomly (except some specific cases) -- but you can use the orbs from your inventory ('i') whenever you want. Orbs allow you to escape situations which would be deadly in the classic mode (although which orb to use to escape the given situation is an important part of the strategy) -- thus, the unlocking requirements in this mode are significantly higher, and you get to face difficult combat situations more often than in the classic mode. The quests have been adjusted to give extra bonuses, and the Hall of Mirrors grants powerful Orbs of the Mirror, which let you gain copies of your chosen Orbs -- this is analogous to character specialization in classic roguelikes. 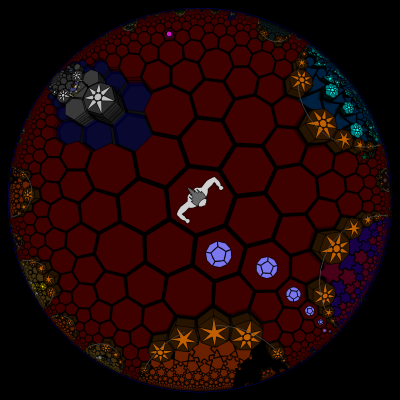 One more small addition -- in the peaceful mode, there is no combat. You can solve various navigation puzzles in HyperRogue without facing enemies, play the memory game and see from what distance you can return to the starting point, or simply explore the world (only the more peaceful lands are available here). This mode is intended as a way to show the geometrical aspect of HyperRogue to new players quickly without the necessity of learning the combat strategies, or possibly to people who are interested in hyperbolic geometry, but not necessarily in the difficult challenges typical for roguelikes.

This version also includes many graphical and user interface improvements. Local scoreboards are now more useful, lines look significantly better now, and the mission screen (obtained by pressing Esc or by being killed) now displays hints about the basic rules of the game, hyperbolic geometry, or suggests trying special modes. The full changelog is available here.

It appears that having the full version free (on some platforms) does not reduce sales significantly, and it has many positive effects -- so I have decided to add the newest features to the free version quickly this time. You can also support HyperRogue on Patreon or buy T-shirts on TeePublic or RedBubble. Have fun!
Posted by Zeno Rogue at 01:49 3 comments: Links to this post