HyperRogue version 3.5 is out (actually it was already available last week, but I have not yet posted in on the blog). It just fixes a bug with the Cultists' ranged attack in R'Lyeh, which was not working as intended.

Also an OSX binary is available on the website. Thanks to Konstantin Stupnik for providing this!
Posted by Zeno Rogue at 00:46 No comments: Links to this post

Some more minor bugs have been found, so HyperRogue 3.4 is released.
Posted by Zeno Rogue at 09:36 No comments: Links to this post

We have finally finished reviewing all the entries in the 7DRL challenge 2012. You can see the results on RogueTemple, and also another version with screenshots, made by Todd Page.

We have one winner (rated 2.72 on average), I rule, you rule, we all rule old-school Hyrule, five tied for second place (2.67), and 7 more with average at least 2.5. I think that these differences are very small: it was often hard to me to decide whether to give a score of 2 or 3 in my review, and also much depends on who reviewed the particular entry. The ones I have tried (as a reviewer or personally) are of a very high quality, and I think every game in the top of the list deserves to be tried. Congratulations to all of them!

HyperRogue II was among the games tied for the second place. It got a perfect score for Aesthetics, Innovation and Roguelikeness, but lower scores for Fun (unfortunately) and Scope (I understand that it is a bit hard to judge scope since a part has been written before the challenge).

Anyway, HyperRogue III raises Aesthetics, Roguelikeness and Fun even higher (and Scope in some sense, although this should be judged for 7DRLs only). And this post announces Version 3.3!

This update is rather minor. Some descriptions are improved; they are now more accurate and detailed. Made it clear that there are actually many Orbs of Yendor. Cultists in the Icy Lands produce more heat now. HyperRogue should now work correctly in a resolutions with height greater than width (not only on Android).

The Android version gets a "share" function, which allows you to share a short description of your character (together with a screenshot). Your characters are be no longer destined to be lost without any trace.

Have fun!
Posted by Zeno Rogue at 17:28 No comments: Links to this post

Posted by Zeno Rogue at 08:14 No comments: Links to this post

This version contains many optimizations, which make the animations much smoother. Mostly due to using compiler's optimizations, but also game mechanics and shape drawing routines are optimized.

There are also some bugfixes and minor features ("dead ivy" shows correctly, necromancy bugfix, restarting after finding the Orb of Yendor no longer crashes the game, help fits better on the screen, you can right click the framerate for hints about improving it.

Here are some screenshots from the Android version. As always, have fun! 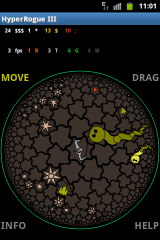 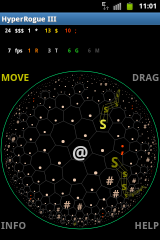 Posted by Zeno Rogue at 03:50 No comments: Links to this post