Most of the changes in this version went into NotEye (I am working on ADOM and some of these features will be probably used there):

Hydra Slayer got two minor changes: lower walls in the ISO mode (previously it was impossible to see scrolls and potions behind walls), and fixed spelling ("machete" instead of "machette").
Posted by Zeno Rogue at 12:33 No comments: Links to this post 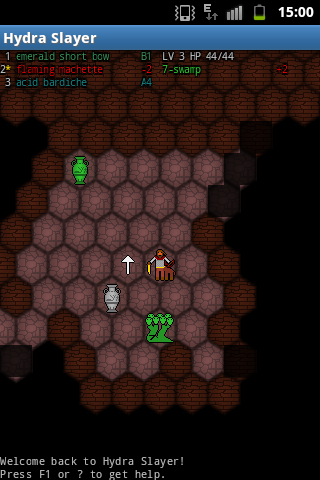 After some time, I have finally managed to work a bit on Hydra Slayer. Most of the work was on the Android port, but I have also found several big bugs in the desktop version, too. Here is the list of changes. There are no real changes in NotEye, except that missing functions have been added: noteye_mvaddstr, noteye_mvaddch, retBool, retStr (as requested by Ancient, thanks!). However, it seems that the work on the NotEye version of ADOM goes well :)

Posted by Zeno Rogue at 06:57 No comments: Links to this post