I think I should mention this on my blog: the first graphical version of ADOM, using
NotEye as the graphical display engine, is available as a closed release! 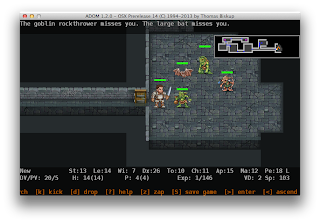 This is available for people who donated in the campaign. If you have not donated, it is also possible to buy access.

Have fun!
Posted by Zeno Rogue at 09:37 No comments: Links to this post

After a relatively long time, a new version of NotEye and Hydra Slayer is released!
This version includes many features and fixes many bugs reported in the meantime.

Have fun!
Posted by Zeno Rogue at 02:33 No comments: Links to this post