HyperRogue has been updated with two new lands! These new lands are different from the old lands in the fact that they are not bounded by straight walls, but by other shapes. In particular... 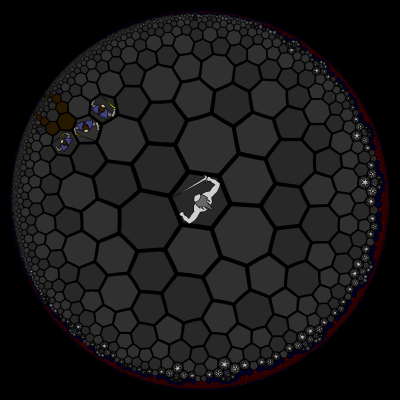 Camelot is a puzzle level -- there are enemies here, but the main goal is to solve a puzzle. It consists of two concentric circles, one of radius 28 (the Round Table) and one of radius 38 (the walls of Camelot). There is a single treasure, the Holy Grail, which is in the center of both circles. Since a circle of radius 28 has 31659398 cells inside it (and Camelot of radius 38 has 12505470664), this is not as easy as it might sound! Once you find the Holy Grail, you can find more castles later (which are all named Camelot), but the circles will be larger (radius grows by two, so the number of cells inside grows roughly thrice). You need to find 5 Emeralds (in the Emerald Mine) to find Camelot in the Crossroads.

As a puzzle level, Camelot is optional -- it is not required for neither the main Quest to get the Orb of Yendor (actually it is probably harder than the Yendor Quest), nor for the Hyperstone Quest. I see several approaches here, so let's see what the players will find. 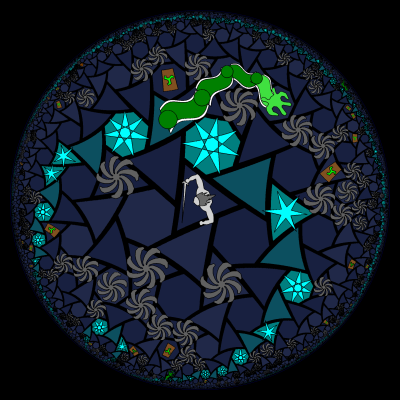 Temples of Cthulhu can be found in R'Lyeh after finding 5 statues. At the first glance, they also consist of concentric circles, each circle closer and closer to Cthulhu himself... there are also many tentacles there who try to block your access to the inner circles, but you can block them by pushing the big statues around. but in fact, these circles are infinite, and there is an infinite number of them in each temple. Difficulty is done differently than in other lands: inner circles are more dangerous, but you need to get there, otherwise you will find the same Grimoires again and they won't count (it is pointless to bring two copies of Necronomicon).

Version 6.2 is already on Steam. HyperRogue Gold for Android is going to be updated soon, and the free version after some time. Have fun! Some other minor improvements: For completeness, version 6.1 fixes the following: And patches to 6.0 fixed: There were also numerous typo fixes and other text improvements.
FURTHER UPDATES:
And patches to 6.2 (version 6.2a):

HyperRogue 6.3 brings new Orb types to the new lands (Temple and Camelot). Orb of Dragon allows one to throw fire just like the Cultists, while Orb of Trickery allows the player to place illusions of themselves. Additionally, more monsters now take invisibility/friends/illusions into account. Also, the Russian translation is ready (and French and German translations are coming).

HyperRogue 6.4a disables the useless "ESC for menu/quest", and fixes the Miner/Slime interaction.
Posted by Zeno Rogue at 11:25 3 comments: